The Duodenal Switch is for people who are extremely obese (BMI of 50 or higher) or who have poorly controlled diabetes. The Switch involves both restrictive and malabsorptive components to produce long-term weight loss and improved control of blood sugar. In the restrictive portion of this procedure, the surgeon removes a large portion of your stomach. The new, smaller stomach is about the size of a banana, which limits the amount of food you can eat at once and helps you feel fuller after smaller meals.With the malabsorption portion, the path of your intestines is changed, which allows food to bypass part of the small intestine so you absorb fewer calories, carbohydrates and fat from the foods you eat, helping you lose weight. You will still need to commit to a healthy diet and active lifestyle if you want to maintain weight loss with this procedure. Since you cannot absorb vitamins and nutrients the same way you do before surgery, it is important to take supplements for the rest of your life 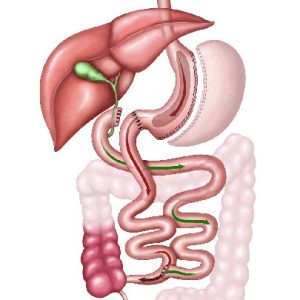 There are two components to the biliopancreatic diversion with duodenal switch procedure. First, a large portion of your stomach is removed. The new, smaller stomach is about the size and shape of a banana, which limits the amount of food you can eat at once and helps you feel fuller after smaller meals. Next, the first part of your small intestine is divided just after it leaves the stomach. Then, a loop of small intestine further down is attached to the cut end by the stomach, allowing food to bypass a significant portion of the small intestine. This allows the body to reduce the amount of calories and nutrients the body absorbs.

The duodenal switch works because the newly created stomach pouch is smaller and can only hold a few ounces of food at a time, which translates into fewer calories consumed. There is less digestion of food by the smaller stomach pouch, and the segment of small intestine that would normally absorb calories as well as nutrients no longer has food going through it, so there is less absorption of calories and nutrients. Most importantly, the rerouting of the digestive process produces changes in gut hormones that promote satiety, suppress hunger, and reverse one of the primary mechanisms by which obesity induces type 2 diabetes.

Duodenal Switch surgery can be performed as a laparoscopic or robotic (minimally invasive) procedure which involves the use of a small telescope-like camera inserted through a small incision made in the abdomen, or as an open procedure where a large midline incision is made in the abdomen. The robotic method is the most commonly used by Dr Swift in Baltimore, Maryland.

If detected, we repair it at the time of the bariatric procedure. This approach minimizes risk of possible delayed surgery for this condition which might be needed in about 20% of patients and greatly improve their quality of life after bariatric surgery

Ready to take the first step to weight loss?