“I had prepared myself for a difficult couple of days after surgery, and what I experienced was the exact opposite, I had no pain. I literally couldn’t believe how great I felt.” – Kim

The Roux-en-Y Gastric Bypass – often called gastric bypass – is considered the ‘gold standard’ of weight loss surgery and is the second most commonly performed bariatric procedure worldwide.
Gastric bypass involves both restrictive and malabsorptive components to produce long-term weight loss. It is restrictive as a result of the creation of a small stomach pouch, and malabsorptive because it creates a method for bypassing a variable portion of the small intestine depending on a patient’s BMI before surgery.

There are two components to the gastric bypass procedure. First, a small stomach pouch, approximately one ounce or 30 milliliters in volume, is created by dividing the top of the stomach from the rest of the stomach. Next, a Y-shaped section of the small intestine is attached to the pouch allowing food to bypass the main stomach. Bypassing the two segments of the small intestine, known as the duodenum and part of the jejunum, allows the body to reduce the amount of calories and nutrients the body absorbs.

The gastric bypass works because the newly created stomach pouch is considerably smaller and can only hold a few ounces of food at a time, which translates into fewer calories consumed. There is less digestion of food by the smaller stomach pouch, and the segment of small intestine that would normally absorb calories as well as nutrients no longer has food going through it, so there is less absorption of calories and nutrients. Most importantly, the rerouting of the digestive process produces changes in gut hormones that promote satiety, suppress hunger, and reverse one of the primary mechanisms by which obesity induces type 2 diabetes. 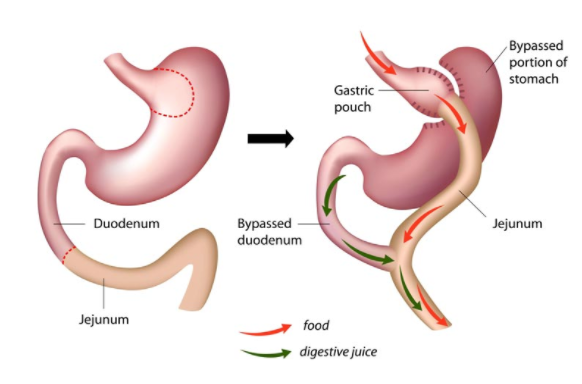 Gastric bypass surgery can be performed as a laparoscopic (minimally invasive) procedure which involves the use of a small telescope-like camera inserted through a small incision made in the abdomen, or as an open procedure where a large midline incision is made in the abdomen. The laparoscopic method is the most commonly used by Dr. Averbach and Dr. Hamdallah in Baltimore, Maryland but not everyone is a candidate for this type of surgery.
You and Drs. Averbach and Hamdallah can decide together which procedure is right for you.

Morbidly obese patients prior to bariatric surgery suffer from a higher frequency of reflux symptoms compared to the general population. To minimize risk of significant GERD after bariatric surgery in Baltimore, Maryland we actively screen patients for symptoms of reflux and hiatal hernia.
If detected, we repair it at the time of bariatric procedure. This approach minimizes risk of possible delayed surgery for this condition which might be needed in about 10% of patients and greatly improve their quality of life after bariatric surgery.

Get started today! Click here to view our on online weight loss surgery seminar.  The first step in your journey towards a new you!

How long does it take to recover from Roux en Y gastric bypass?

Recovering from roux-en-Y gastric bypass is a process that takes several weeks. Patients are given a special post-op diet to assist in recovery. Patients typically are able to return to work after 1-2 weeks post-op. We recommend patients avoid heavy lifting or strenuous activity for 4-6 weeks after surgery.

What can you eat after Roux en Y gastric bypass?

Patients who get roux en Y gastric bypass are given a special post-op diet that they must follow in order to avoid complications and to kickstart rapid weight loss. Patients start with a liquid fast, then are allowed to start reintroducing pureed and soft foods over time. After about 4 weeks of this diet, patients can start reintroducing normal foods.

The roux-en-Y gastric bypass is not meant to be a reversible procedure. However, we offer revision surgery to patients who are not satisfied with the results they get from the gastric bypass procedure.

Are there any risks involved in the Roux en Y gastric bypass?

Risks involved with the roux-en-Y gastric bypass are minimal, however most patients will experience some form of abdominal pain. Very few patients will have serious complications resulting from staple line leaks or infections.